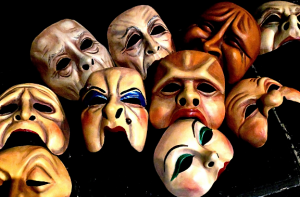 When you think of an actor, glamorous images of Hollywood celebrities and Broadway stars most likely come to mind. Likewise, most actors pursuing their craft endeavor to one day grace the silver screen in pursuit of fame and fortune. But there are some artists whose ambitions also involve using theatre as a tool for education and empowerment. Jesse Wilson is one such artist. In addition to a robust 20-year career on the stage, Wilson is also a highly sought-after communications coach and trial advocacy specialist. Founder and CEO of Tell the Winning Story, Wilson has trained numerous trial lawyers and businesspeople to communicate more powerfully in and outside the courtroom and boardroom. He’s now making his teachings more accessible through a new CLE video series released from Trial Guides: “The 8 Fundamentals of Breakthrough Communication.” In this video series, Jesse co-instructs with highly respected trial attorney Mel Orchard, managing partner of The Spence Law Firm and faculty lead at Gerry Spence’s Trial Lawyers College in Wyoming.

After graduating from Juilliard, while Wilson’s sights were set on a career in TV, film, and theater, he also knew he wanted to use his art to help others.

The opportunity came when Wilson co-founded a unique theater program for prison inmates called Lessons From The Stage. Through this program, he and his co-founder David Fein empowered inmates to delve into their creativity and vulnerability to explore and express emotion in a healthy way while developing and improving communication and teamwork skills. “These are vital skills needed to be re-introduced to living productive lives back in society,” Jesse says.

The experience profoundly affected Jesse and it was not long before he was providing more extensive communication skills training to trial lawyers.

“With the lessons from the stage, my mission is to empower people to discover that within each of all of us is the power to unmask our hidden, raw potential and transform that authentic power into the greatest realization of ourselves in virtually every area of our lives,” Jesse Wilson states.

Since founding Tell the Winning Story, the respected trial advocacy specialist has helped win several high-profile and high-stakes cases, including $90, $45, and $12 million verdict wins in the last few years alone. This includes Blake Vs Werner Trucking, in which Penn Law Firm used Tell the Winning Story to persuade a jury to find Werner Entreprises negligent in a 2014 trucking collision, in the amount of $90 million awarded to a family who lost a son in the crash. It was the largest verdict against Werner in the company’s history.

Through Tell the Winning Story’s proven-effective trial skills training programs like “The 8 Fundamentals of Breakthrough Communication,” Jesse Wilson and co-instructor and Mel Orchard helps lawyers and their clients achieve justice. The series covers every aspect of the story writing and telling process, from opening statements to closing arguments, in addition to keeping the audience (jury) engaged and invested throughout.

“They help prepare you and your team to win by teaching the most persuasive approach to your case and helping you craft the best strategies to connect and persuade your jurors,” the trial skills consultant said of the new video series.

The series kicks off with finding your passion and leveraging it to get to the heart of the case and convey this emotion and impactfulness to the audience. It continues with “flipping the script” and finding the value in conflict. The third video instructs on revealing the power of choice. “Identifying the point at which you, your client, and your jury must make a singular choice in the scene by scene narrative of your story is where the emotion connects, where the jury relates, and where you can lock up your case. You will learn how to develop the right language, themes, and ‘power anchors’ essential to any winning story,” the Tell the Winning Story CEO explained. Next is a fourth video that instructs on ensuring the story you tell is one of perseverance, not pity. Fifth, Jesse Wilson discusses how to dig deeper than the surface to connect with the client, judge, and jury on a deeper level. In the sixth video, the trial skills consultant discusses tapping into emotional states using theatrical tactics to make a more compelling story. Next, he discusses the “power of the pause” or non-verbal communication. Finally, the series wraps with a discussion of how these principles and tactics can benefit you, the lawyer, beyond the courtroom.

To learn more about Tell the Winning Story and “The 8 Fundamentals of Breakthrough Communication,” available on Trial Guides visit the website: https://www.tellthewinningstory.com/the-8-fundamentals-of-breakthrough-communication/